The ongoing tragedy of the Hillcrest Primary jumping castle incident has prompted the Tasmanian Education Department to ban the use of jumping castles at state schools.

The department called for an immediate ban shortly after the incident on Thursday morning, which was followed by a formal directive that was sent out to all state schools and teachers about 4pm on Friday.

"Following the tragic incident at Hillcrest Primary school yesterday the decision has been made to place a ban on the use of all jumping castles and inflatable amusement equipment on all [Department] sites," Senior work health and safety adviser Mark Lobban wrote in the announcement.

"This extends to cover all external hirers of [Department] sites.

"The ban will remain in place until further notice."

A spokeswoman for the Education Department confirmed the ban. 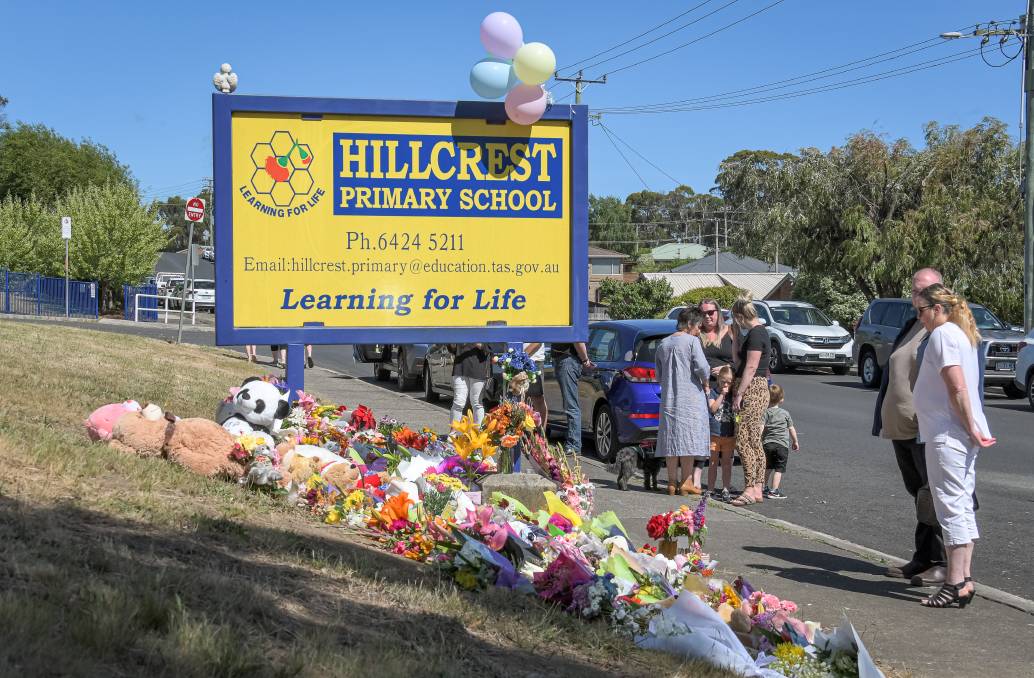 "The Department has put a hold on the use of jumping castle style equipment until the results of the investigation are known," she said.

Jumping castles are regulated as part of a national standard, and the regulation of jumping castle operation in Tasmania falls to WorkSafe as part of the Justice Department.

A Justice Department spokeswoman said, "WorkSafe Tasmania had not received incident notifications of complaints about the use of jumping castles since 2019".

As part of those standards, all jumping castles and "inflatable amusement devices that are continuously blown and have a height of three metres or more" are required to be registered.

It was not know whether the jumping castle used at Hillcrest Primary fit that brief, and the Justice Department spokeswoman could not confirm if the jumping castle was registered as the incident was "subject to an ongoing investigation".

The email came as the community pieced together what had happened on Thursday morning, and responses were made to how those affected would be able to work to move on from the tragedy.

Earlier in the day, the names of the five children who were killed were released, while four children remained in hospital. 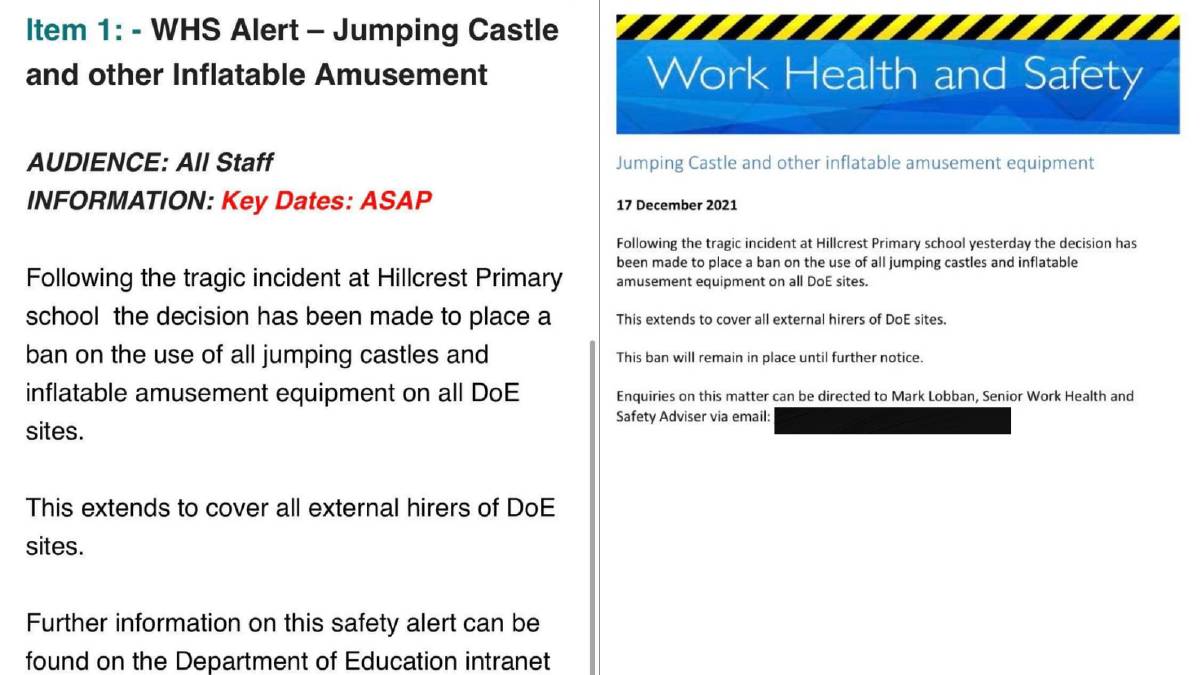 The directive sent to teachers on Friday afternoon.

Time for a jumping castle ban?

Murchison MLC Ruth Forrest, whose electorate stretches close to Hillcrest Primary, said extending that ban to the whole state could have merit.

"I believe a temporary ban should be imposed on the use of jumping castles, especially outside, until a full and thorough review has been conducted," she said.

"If their safety cannot be assured, a permanent ban may be needed and other safer forms of such entertainment for children utilised."

A incident in the UK in 2018 during which a jumping castle exploded, killing a seven-year-old girl, prompted the local council to ban jumping castles until the investigation wrapped up.

Two days later the council revised the ban to only include "sealed inflatable devices", as opposed to safety legislation complaint jumping castles.

Ms Forrest said it was impossible to "wrap children in cotton wool", but whatever protection could be afforded, should be.

"Children need and deserve to have fun, excitement and engage in play where some risk is involved, but always with a base of an activity being safe whilst using such equipment," she said.

"We know that jumping castles can and have caused injuries to children here in Australia and overseas, but no-one could possibly have contemplated such a tragedy as occurred this week."

AAA spokesman Damian De Jong said a permanent ban on jumping castles as a result of the incident would bring about an end to the income of about 1000 families who makes money from inflatable devices.

"I don't think we need more regulation, but we do need more education about what clients can look for to make sure they're getting a good operator," he said.

Mr De Jong said the industry was "highly regulated" and problems generally only arose when "backyard operators" did not follow regulations.

He said jumping castle standards indicated if wind speeds exceeded 39.6km/h, the inflatable device could not legally be erected.

Bureau of Meteorology data from Devonport on Thursday indicated wind speeds near Hillcrest Primary did not exceed 39.6km/h.

"From one incident, this is now going to impact us all. But Just hope there's a balanced debate, not just calls for bans. Our industry has been very safe for a long time," he said.

"[Jumping castles] are not dangerous if they're operated correctly."

AALARA president Shane McGrath said his organisation had been rocked by the tragedy.

"We are devastated ... Guest safety is and will always remain the number one priority for our members - it is an area our industry must continually challenge itself on, to ensure the highest standards are met."

Ms Forrest also issued a tribute to the children and community members affected by the tragedy, and called for a sustained response to assist those impacted.

"The heartbreaking events at Hillcrest Primary School have impacted all Tasmanians and it is almost impossible to imagine the grief and anguish of so many members of our North-West community, particularly the families and friends of those who tragically lost their lives or those who suffered injuries," she said.

"The impact on all families, friends, staff of the school and first responders will be immense and long lasting. Schools undertake significant risk assessment with all activities for children in their care and hundreds of similar events have been held around the State and country over the last week.

"It is incumbent on both state and federal governments to ensure dedicated, specialist mental health care and support is readily available in the North-West community now and in the years ahead. This is vital for the recovery of our community, the families, friends and staff of Hillcrest so deeply impacted by this tragedy."

If people need support at this difficult time, there are a range of 24-hour support available: