Claudine Watson-Kyme was shocked to discover her 15 year-old daughter Sophie was vaping regularly. Even more shocking, that she required hospitalisation for a severe asthma episode exacerbated (and potentially induced) by her use of disposable vapes, also known as e-cigarettes.

Then, through hospital questioning, she learned her daughter was addicted, vaping four times an hour.

Now, she wants to warn other parents about the dangers of e-cigarettes, which often include nicotine in their enticing flavours such as bubble-gum, grape, cotton candy and pink lemonade - even when they say they don't.

As director of the Drug and Alcohol Research and Training Australia (DARTA), Paul Dillon speaks about vaping at hundreds of schools every year and hears first-hand the impact of it on teenagers like Sophie.

He has parents contacting him about their child's vape addiction once a fortnight and has met kids who can't get through a lesson without vaping.

Some schools, he said, have installed sophisticated vapour detectors in their bathrooms.

But he also knows of parents who encourage their child's vape use, believing it to be safer, and mentions one Sydney private school where parents lobbied for a "vape room" for HSC students. 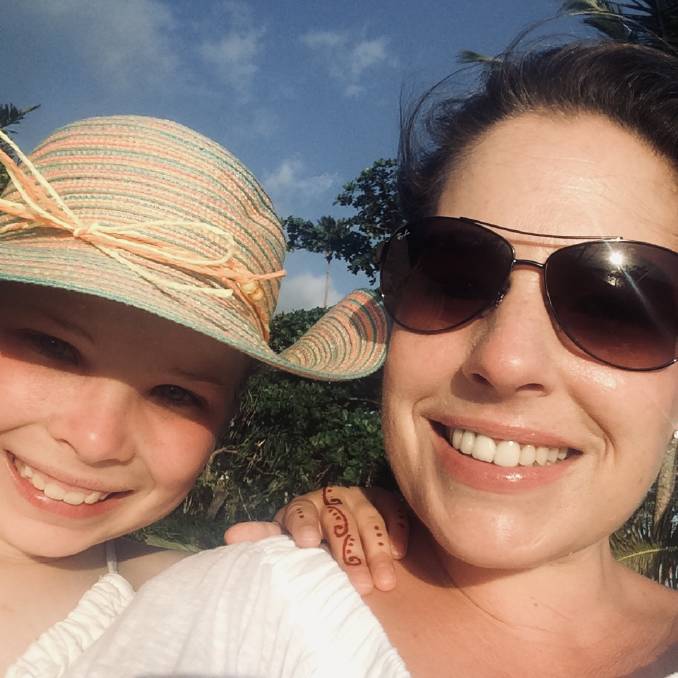 Claudine Watson-Kyme wants to warn parents about the dangers of e-cigarettes. Picture: Supplied

"When vaping first came up with young people, when I started getting calls from schools in 2015, I thought it would be a fad, like yo-yos," he said.

"Six years on, the reality is that there are very few schools that have not had some issue with vaping. I have been involved with primary schools that have had Year 5s not only using, but selling vapes at school."

Ms Watson-Kyme was brave enough to take on the issue, speaking to politicians, police, health workers and even vape retailers - including some in the northern beaches.

"I was reluctant to bring it to public attention because I was concerned about judgment from other parents but this is a far bigger issue than quality of parenting," she said.

"This is about our young, vulnerable, impressionable kids being exposed to unassuming but extremely dangerous devices which, despite it apparently being illegal for young people, are blatantly being targeted towards and sold to minors without conscience."

She said she had no idea about the extent of her daughter's vaping until they arrived at the hospital.

"What started as a bunch of teenagers obtaining and sharing these devices about 12 months ago evolved into a full-blown addiction where she was using the device at least every 15 minutes," she said.

"She was requiring more than one Ventolin device per week and her lungs are very compromised.

"I thought I was a present, vigilant mother who had tried to educate her about the dangers of smoking and vaping. I was shocked and devastated that my beautiful young daughter has to contend with an addiction that should never have been so easy to develop. I feel like young people who are easily influenced by trends and peers are being exploited by companies who are largely unknown."

A new federal law enacted last year will come into play on October 1 to make the sale of nicotine-containing vape products (including liquids) illegal in all states and territories unless the buyer has a prescription. This means that anyone wanting to use a nicotine device needs to go to a doctor and be declared nicotine dependent, and then purchase their nicotine with a prescription.

Paul Dillon reckons this will be a gamechanger. Although it makes things more complicated for adults using e-cigarettes as nicotine replacement therapy, it could help control the disposable vapes generally used by young people.

"The fact of the matter is that nicotine is very addictive," he said, referring to a NSW Health study that found that a majority of vaping products labelled "non-nicotine" actually did contain nicotine. A legal and policy advisor for the Minister for Health and Aged Care, Greg Hunt, told Ms Watson-Kyme in a letter: "Your daughter's story is sadly consistent with the recently emerging evidence across Australia - between 2016 and 2019 the number of e-cigarette users aged 15-24 increased by approximately 72,000 (95.7% increase) for a total of approximately 147,000 ... There is evidence that nicotine e-cigarette use acts as a 'gateway' to smoking in youth and exposure to nicotine in adolescents may have long-term consequences for brain development. This evidence motivated the TGA's decision."

Mr Dillon said that one of the biggest issues with e-cigarettes was not knowing what was in them, or what damage they were likely to cause years down the track. A lack of new data on usage - and especially reasons for usage - was complicating treatment of the problem - with the last large-scale survey conducted in 2017 and future surveys delayed because of Covid.

While they don't produce the tar associated with traditional cigarettes, hazardous substances have been found in e-cigarette liquids and in the aerosol produced by e-cigarettes. These include the carcinogens formaldehyde, acetaldehyde and acrolein.

In the USA, there have been a number of reported deaths in young people directly related to vaping and rising morbidity including the need for lung transplants. In a study published by the New England Journal of Medicine, a team led by doctors from the Mayo Clinic in the US examined lung tissue biopsies from 17 people - median age of 35 - suspected to have vaping-associated injuries. All 17 were found to have injuries in their lungs consistent with chemical burns.

"Since posting the petition, I have had so many parents contact me to say how deeply problematic this is in schools - kids are blatantly doing it in classrooms, some who are in primary school," said Ms Watson-Kyme.

"Many have watched kids walk into tobacconists and buy these devices from the shop, no questions asked about age. One friend was so livid that she told me she went into the shop and gave them a piece of her mind. I see teenagers at bus stops openly using vapes and you only have to walk around the local streets to see numerous empty cartridges tossed into the environment."

She has a list of 'no questions asked' online vape sites and has checked out local stores. "They are almost never on display; you ask what they have and they generally show you a picture of what they sell on their phone and you choose," she said. "I am generally told I need to pay in cash which just smacks of it being covert."

As for Sophie, she is doing well now. Although she had to chew nicotine gum to stop the cravings, she has not vaped since she left hospital and is not needing her Ventolin as much.

"It was a wake-up call for us," said Ms Watson-Kyme. "I was embarrassed to talk about it at first but I can't just stand by without trying to make people more aware of the dangers of disposable vapes."

How to talk to your child about vaping