It reads like the script of a Hollywood movie, perhaps with the lead role played by a young Hugh Jackman.

A boy, aged just 7, is spied dancing around his northern Sydney home by his next-door-neighbours - lovers of the arts - who soon visit his mother and urge her to enrol him in dance lessons, such is his talent. Which she does, without question. Boy loves dance, especially ballet, pursues it with single-minded passion, eventually making it to the The Australian Ballet centre stage, with peaks and troughs along the way. This is the story of Nathan Brook, now aged 26, Australian Ballet soloist and recent Rising Star and People's Choice winner "in recognition of his exceptional ballet talent and contribution to the artform" at the Telstra Ballet Dancer Awards.

"I loved to dance, I was dancing around the house from a very young age," says Nathan. "It was my instinct. It was just always what I wanted to do. I would happily say I was born to dance."

His dad, Freshwater pharmacist Martin Brook backs this up, telling Nathan: "From the moment you could walk, you just kept dancing. There was nothing we could have done to stop you. That path was there and you just took it." And the neighbours? The Dummets - Bob, a trumpet player, and the late Jean, a former pianist - closely followed Nathan's career from those fateful early days, attending his concerts and gifting him Nutcracker and Romeo and Juliet CD's at Christmas every year.

But, a decade or so ago, pursuing a dance career wasn't a well-trodden path for a boy from the Beaches. Nathan had initially enrolled in Boys Funk, with about 20 other boys, but it didn't take long to fall in love with ballet, and there very few male classmates at Avalon Beach's Lamont Dance School, with Aryana Lamont. Eventually, he also had to choose between soccer and ballet.

"I was upset because I didn't want to give up the time with my mates on the soccer field but at the same time dance was number one, there was nothing that would stop me dancing," he says. 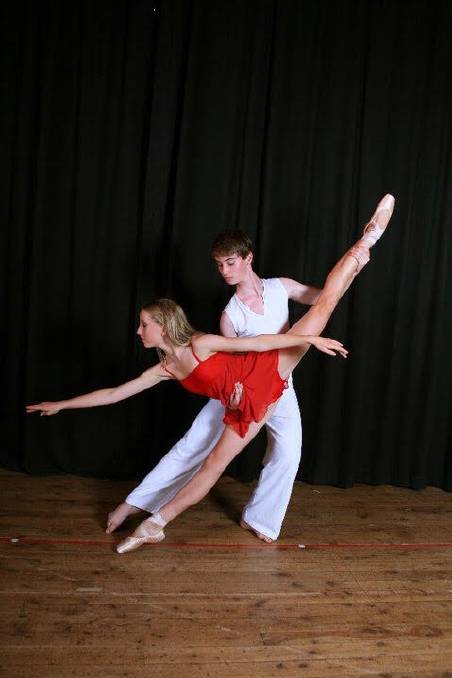 Nathan Brook with long time Avalon friend and now dancer with Hamburg Ballet, Hayley Page. They both studied locally at the Lamont Dance School in Avalon Beach, with Aryana Lamont.

In high school, he encountered "a little bit" of bullying.

"Going against the grain in the way that I did - following ballet as a path - definitely raised a few eyebrows in the playground. So that was hard, being OK with being different," he says. "But, really, the whole time, dance was where I could really express myself freely and I just ran with that."

He adds: "I had the most supportive family and great friends at school who helped me through that time when I was feeling a bit different and a bit unusual."

He credits some of these friends - and the wider northern beaches community - with propelling him to victory in the Telstra People's Choice Ballet Dancer award, which this year generated the highest number of online and text votes ever - 240,000. (Financially conservative, he says he hasn't gone on a giant shopping spree with his $40,000 winnings, instead depositing it in his offset account.)

Now, he says, he wishes he could tell his young self: Just Own It.

"As a kid, anyone that has a point of difference, it's amplified by everyone on the playground. You're fat, you're skinny, you've got red hair - anything like that," he says. "So I was always a dancer and that would come up if there was an issue. I would take it as an insult. I wish I could go back to my young self and say 'Just own it. Just say, 'well yeah, I do dance. There's nothing wrong with that, you know?'" On his last day of high school at Mater Maria in Warriewood - before he transferred to the Fame-like The Australian Ballet school in Melbourne - he was asked to perform ballet on stage at the final year awards night, but said no.

"I was always too nervous to share with everyone. I didn't want to get picked on for it. I knew I was going to stay around the community and I was timid to do it," he remembers.

"I'm not anymore. I'd go back and do it for the school now. I'd go and do a little performance, if they asked me, I'd do it for sure."

His years spent at The Australian Ballet school were transformative. But it was something he never thought he would be able to do. When he was offered a full-time place at the school, he was flattered, but aged just 13, there was no way he was contemplating leaving his family in Clareville to head down to Melbourne solo. But on the way back from the audition, walking to the car, his mum, former midwife Maureen Brook, said simply: 'alright, I guess we're moving to Melbourne then'.

"She uprooted her life, left the rest of the family, to help me pursue my dreams in another state," he says now. "Mum and dad did long distance for five years when I was down at the school and now they are back together in Avalon."

Her support through the gruelling 10-hour-daily academic and ballet schedule was invaluable: "I was so blessed," he said. Despite the hours and physical intensity, he loved it from day one. "I remember coming home and saying to mum: 'this is the place for me'. I was just surrounded by people that had this same passion for the art form that I did. It was instant. " The family are still huge supporters: his sports-loving brothers, James and Lachlan, both work in construction and regularly come to see him perform.

"Ballet and construction. Chalk and cheese!" he laughs. "But they have developed an appreciation of it, they see a really high standard and enjoy watching me dance."

Despite clearly having a gift for ballet, it hasn't been an easy road. He initially failed his Australian Ballet audition upon graduating the school, and spent an intense two years at Queensland Ballet, envisaging then-artistic director David McAllister watching him rehearse, over and over again.

"It was always my dream to be in The Australian Ballet so I was heartbroken - but it was the making of me because it spurred me on to work my butt off and prove them all wrong," he says. "I just wanted it so badly. I was so determined, focused, I worked really hard. It was in Brisbane so there would be buckets of sweat."

It worked: his improvement was remarkable and he made the grade for the prestigious national company. That was five years ago, and he has since served as coryphée in 2018 then soloist since 2019, and is now aiming to achieve Principal Dancer status. And did he ever tell David McCallister that he imagined him up there, at the front, judging, for two whole years? "Yeah I did, and he cracked up! I still tell him! And we are really good friends now that he's not my boss. He is glad he didn't take me straight away - he says those years at Queensland Ballet really made me who I am." 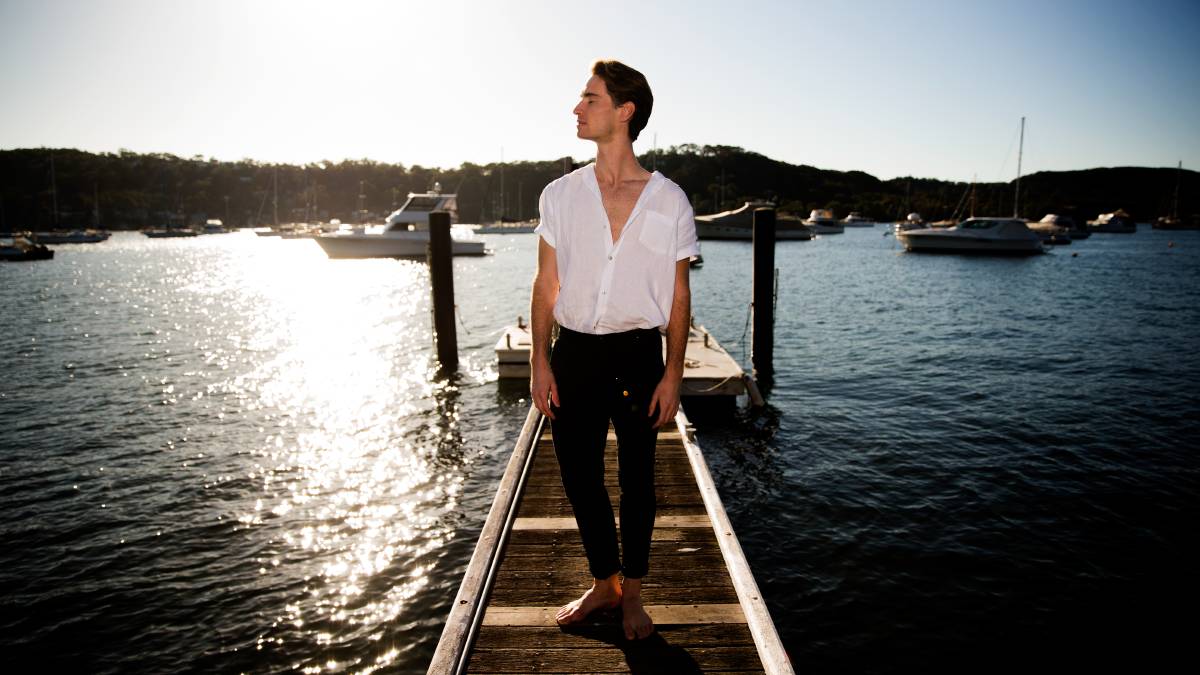 When ballet dancers aren't performing, they are working long, hard, repetitive hours on technique, as well as fitness and of course recuperation. When they are performing, they are likely to be working even longer hours, six days and eight shows a week. When we speak, he has just finished two consecutive and overlapping shows in Sydney, New York Dialects and Counterpointe, commuting to the Sydney Opera House from his Clareville base, and is moving back to his Prahran, Melbourne home to continue Counterpointe there. (Nathan and partner Calum Bolton are also building a home in the Macedon Ranges, north of Melbourne.)

It is unrelenting. Injuries are common, with so much physical training, but Nathan says The Australian Ballet has a "world-renowned" health team and tailored programs to prevent and recover from body strain.

He predicts he has about a decade left performing, all things going to plan. "I'd love to do it for as long as I love it but I think I will love it forever!" he says. "To be honest, I think when my body starts to be a bit old and decrepit, they will have to wheel me out of the Opera House!"

After hanging up his pointe shoes, he is keen to enter the corporate world, perhaps in philanthropy. The ballet world has an established philanthropic arm - Nathan is sponsored by two ballet-loving locals, Steph Fairfax and luxury travel entrepreneur and daughter of Dick Smith, Hayley Baillee.

"They have given the company money so they can pay my wage. I'm their dancer but it's more than financial," he says. "They have taken me under their wing and they are mentors as well, they have really helped me as a person."

The relationship has been morale boosting for the 26-year-old. "In ballet, you are constantly looking in the mirror and finding ways to be better and stronger and have a higher jump and nicer line and you are very self-critical," he says. "To have people there supporting you to better yourself as well, it is just a huge recognition and such an honour."

The path to ballet, he says, can be complex for male dancers - they may join a class with their sisters, or start with drama or tap or musical theatre and then find ballet. ("But I've never met anyone whose neighbours watched them dance from next door and then told their parents to put them into ballet!" he laughs.) He has spoken out for marriage equality and is keen to mentor dancers down the track.

And he will never stop appreciating the artform. "I love the freedom of expression it gives you, the mastery of it because you never reach perfection," he says.

"Ballet will always make you want to achieve more and it's very rewarding when you accomplish aspects of ballet technique. I don't feel like I've peaked because I've had to work really hard to prove myself, which I think is a really good thing because I've still got motivation to be better. My big thing is to be a principal dancer and to have the ability to move people. I just need to dance well, do lots more feature roles and keep climbing the ladder."

This story Born to Dance: How a nosy neighbour launched this ballet dancer's career first appeared on Northern Beaches Review.