Kamahl. He's one of the few famous Aussies who gets to go by a one word moniker.

He's met Princes Harry and Charles, Presidents Obama and Clinton, the Dalai Lama, Queen, and exchanged "about 60" letters with his friend Donald Bradman. He was discovered and sponsored by Rupert Murdoch - even living with him for three years. 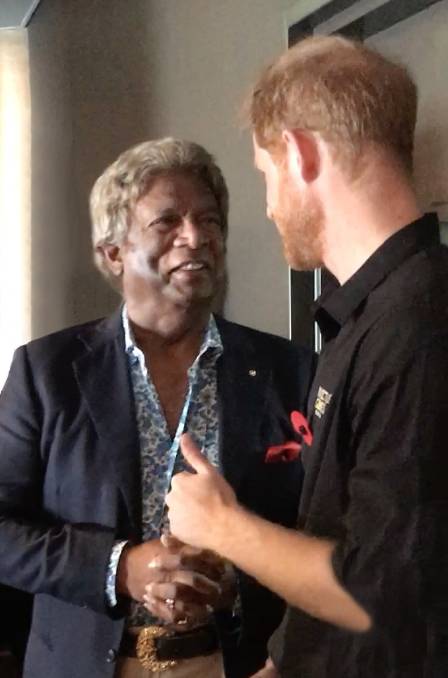 He began singing in Australia in 1958, and has had plenty of platinum and gold albums. But he's popular around the world and has performed all over the place, including at Carnegie Hall - twice - and has had number 1 hits in the Netherlands and Belgium. One woman in Holland, he says, has had a Kamahl fan page for 44 years, and still updates it every week.

But it hasn't been an easy ride, he tells the Northern Beaches Review from his new downsized apartment in suburban Belrose in Sydney's northern beaches.

At 86, with grown up children - his son Rajan, is 51 and daughter, Rani, 49 - the move from the Sydney upper north shore has been sparked by a need for community.

"I wanted to be in a more friendly pitch while I'm still batting," he says. "But I've been decluttering endlessly. I have more in storage than I have in my suite."

The debonair and well-coiffed charmer is enjoying meeting his neighbours, travelling in his baby blue Rolls Royce to grab groceries or Japanese lunch at the nearby Glenrose Village Shopping Centre and exploring the northern beaches. But don't expect to catch him in the surf.

"I nearly drowned when I was nine-years-old so I don't like any water more than five foot deep," he says. "I never got over it." 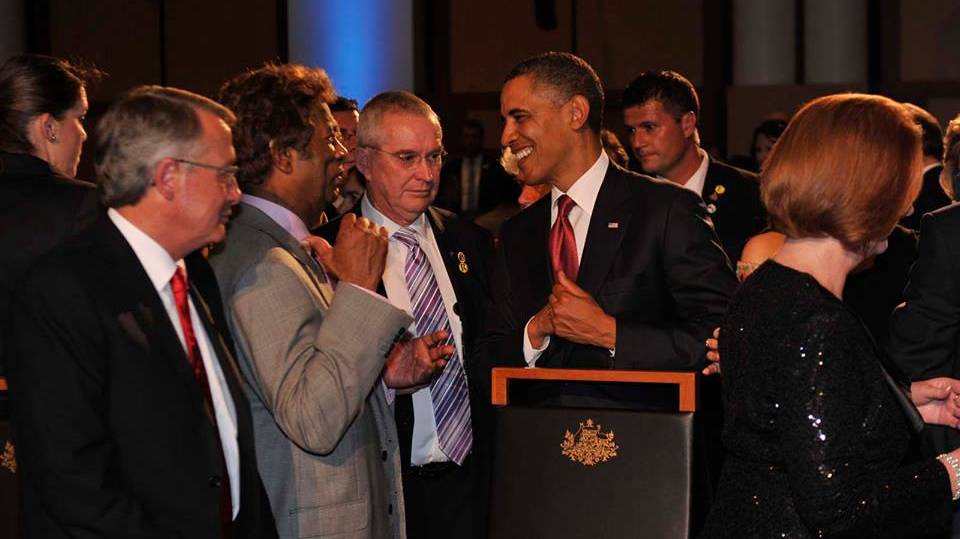 To get across his meandering, star-studded life, you'll need quite a few hours.

But here it is in a nutshell: born Kandiah Kamalesvaran in 1934 to Sri Lankan Tamil parents, he grew up in Malaysia and missed a lot of schooling due to the Malayan Emergency.

"My most vivid memories were hearing bombs falling around," he says, "and we dug holes deeper than graves to shelter in every time we heard the siren."

Aged 19, he came to Adelaide to fill the education gaps, enrolling at Kings College (now Pembroke School), then into architecture at university, where he studied less than he played cricket. All the while, he sang as often as he could at bars and restaurants around the city, and influential Adelaidean newspaper proprietor Rupert Murdoch happened to see him perform at a nightclub one night.

He gave Kamahl £10 - a princely sum in those times - before asking him back to his house for dinner, where the singer says he didn't get a chance to tell him he was a vegetarian, so ended up slipping the steak in his pocket so as not to offend.

Still, an alliance was formed: Murdoch soon launched a television station, with Kamahl performing the inaugural broadcast, performing with a band for his first time.

He was then persuaded - actually, ordered, he says - to travel to Sydney, with a one-way plane ticket and a six-week gig at the prestigious (now demolished) Hotel Australia secured by the media magnate.

"When it all ended, as I was leaving, Rupert caught hold of my jacket sleeve and told me to stay here in Sydney and become a big star," says Kamahl. "When I told him I had nowhere to stay, he said, 'you're moving in with me'." 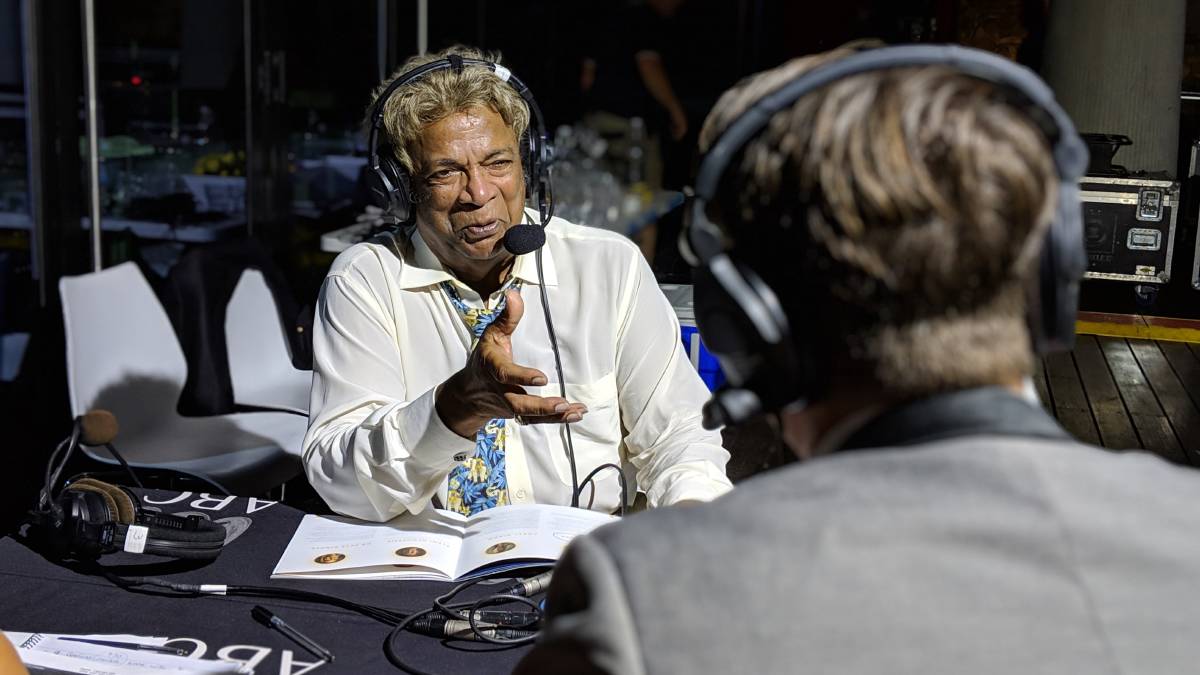 Kamahl has been performing for 60 years. Picture: Supplied

Kamahl says he then spent three years in the tumultuous but roaming Murdoch home in Darling Point with a mostly-absent Murdoch (he was launching The Australian newspaper in Canberra), his first wife Patricia and their baby daughter Prudence.

Initially, velvet-voiced Kamahl tried to imitate his hero, Nat King Cole. But, enrolled briefly at the Conservatorium of Music, he was encouraged to sing rather than croon, and to try other styles, such as classical music.

"But I always wanted to do popular music and romantic songs," he says. "It was always the lyrics that appealed before the music." 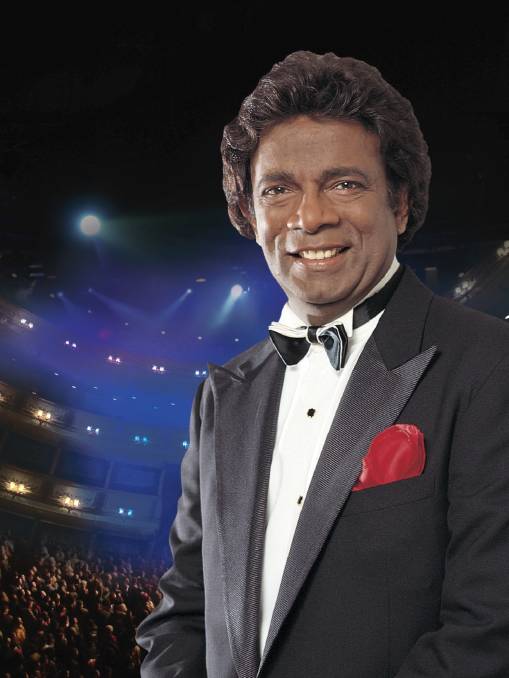 That advice, however, helped his career take off. Most Australians, he says, know him best from his guest singer stints on Hey Hey It's Saturday. But he doesn't remember that time fondly, recalling being hit in the face with a cake, laughed at and cut off during his time there.

"Unfortunately, that's the program I like least of all," he says. "It was in that show that I was humiliated publicly more than any other time in my life. They hit me with a white powder puff cake. Would they do that to John Farnham or any other artist they considered important?" 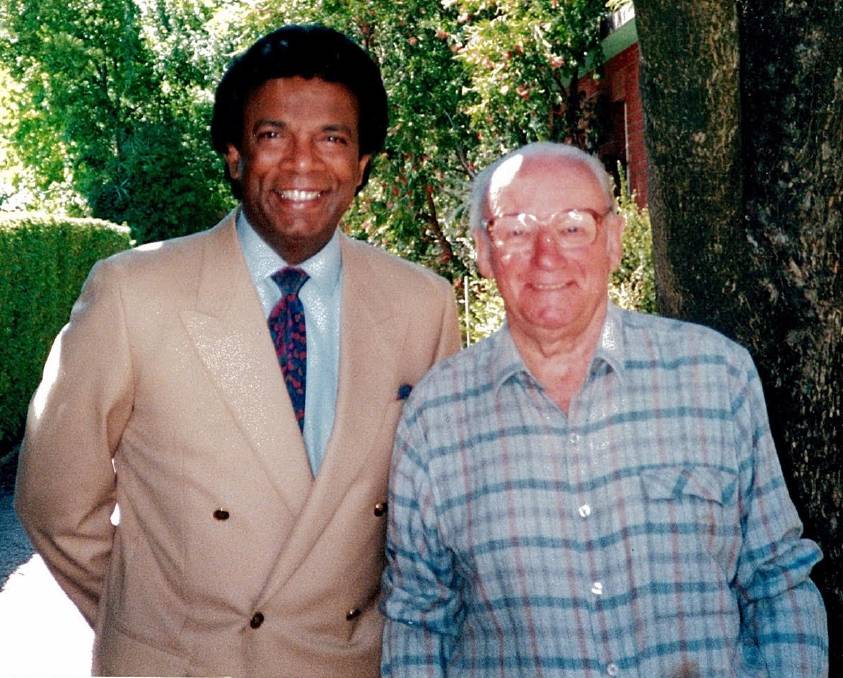 He has borne the brunt of racist behaviour for much of his career. Making the 1967 movie Journey out of Darkness, he and his Aboriginal co-star Julie Williams were forced to have a sandwich outside while everyone else lunched together inside.

"I've been assaulted, humiliated and spat on," he says. "The media and fellow entertainers couldn't work out why I was successful."

But the longtime Australian citizen and AO-recipient doesn't dwell on this. Shaking off the 'Why are people so unkind?' line oft-credited to him, he says people have chosen to be both kind and unkind, but that he has been mostly celebrated by his fellow Aussies.

"It is still a beautiful world. I enjoyed irrational generosity more often than not," he says. "I am eternally grateful for that generosity." 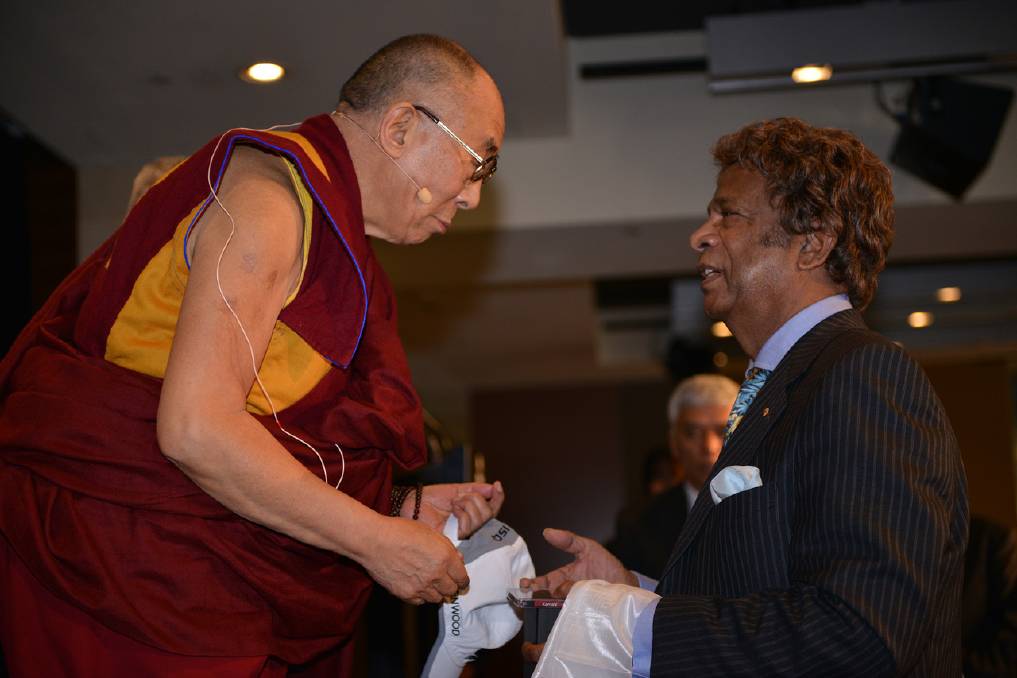 He says fame, though, is overrated - although it may have garnered him better plane and restaurant seats.

"I don't know how I got popular," he ponders. "Unlike sports, it's not a race where you know a clear winner. You may not be very good but they may like or love you. And, somehow, Australians loved me from my first experience. They enjoyed the noises I made and then they tolerated the fact that I made them."

His crowning moment - or the "apex of all my performances" - comes up constantly in conversation: performing the Invictus poem for Prince Harry at the Invictus Games at Brisbane two-and-a-half years ago. He performs it for me, twice.

It about overcoming adversity and it's very moving. But he's still angry about the officious representative who shuffled him along when he and the Prince were chatting after the recital.

He says he can understand how Meghan Markle has been treated by the Palace, after his experiences.

"What Harry and Meghan experienced was a pigment, not a figment, of your imagination. The Royal Family has a problem with the pigment," he says.

"I go through it every day, meaning that I think about it one way or another. Maybe if I was white my life would have been the same. But maybe it wouldn't. I never let the bastards get me down." 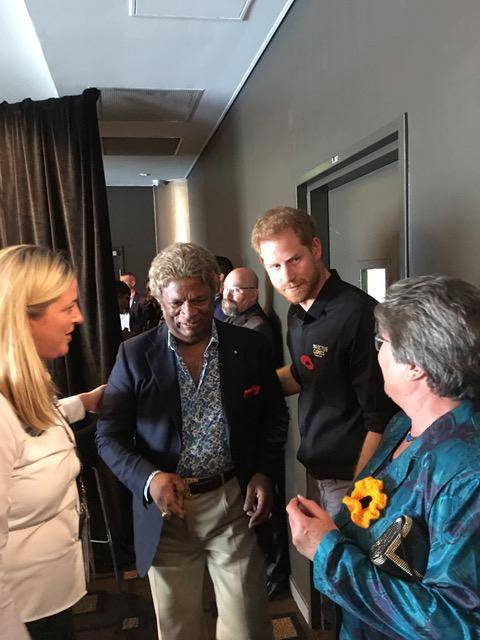 Because of the over-zealous rep, he never got the chance to tell the Duke of Sussex about the letters he had exchanged with his father, or to ask whether he had heard such a passionate rendition of the poem, written in 1875 by William Ernest Henley and regularly recited by Nelson Mandela when he was in prison.

Out of the night that covers me,

Black as the pit from pole to pole,

I thank whatever gods may be

For my unconquerable soul.

In the fell clutch of circumstance

I have not winced nor cried aloud.

Under the bludgeonings of chance

My head is bloody, but unbowed.

Beyond this place of wrath and tears

Looms but the Horror of the shade,

And yet the menace of the years

Finds, and shall find, me unafraid.

It matters not how strait the gate,

How charged with punishments the scroll,

I am the master of my fate:

I am the captain of my soul.

But Kamahl is pretty sure it was a success.

"I've never seen anyone react like that me in my life," he says now. "At the end of the poem, he got up and came to me with arms outstretched as if to give me a hug.

My insecurity as a black man made me break that hug and shake his hand instead. But it was emotional, beautiful and moving.

An experience that I don't think I can ever touch in my life. To me, it is everything, a seal of approval that should overcome some of my insecurities. 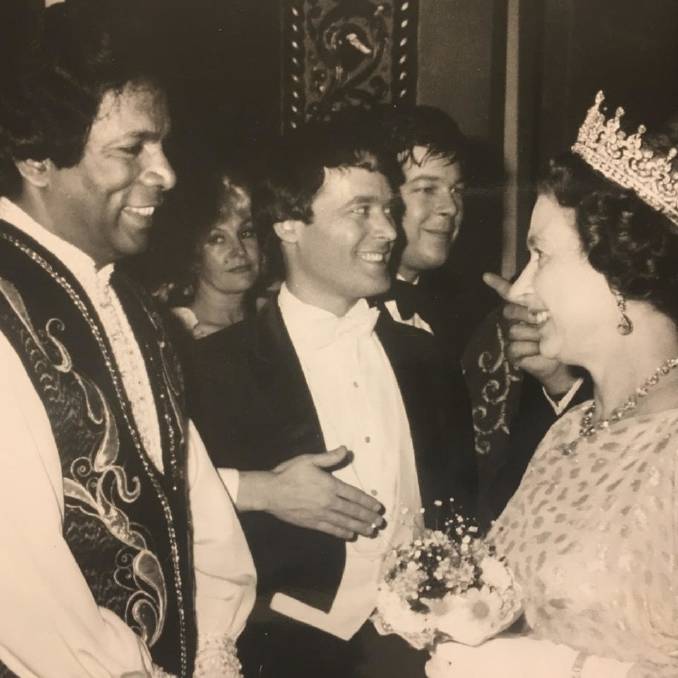 "I was always concerned with the negative feeling that I was second rate and nobody would ever rate me as worthwhile. I have an inferiority complex to this day. It's my perception that if you are born black you are born with a lemon but fortunately, I made lemonade. I was told 1000 times I was not talented and I kept on going. I believe in what I do and my words I share." 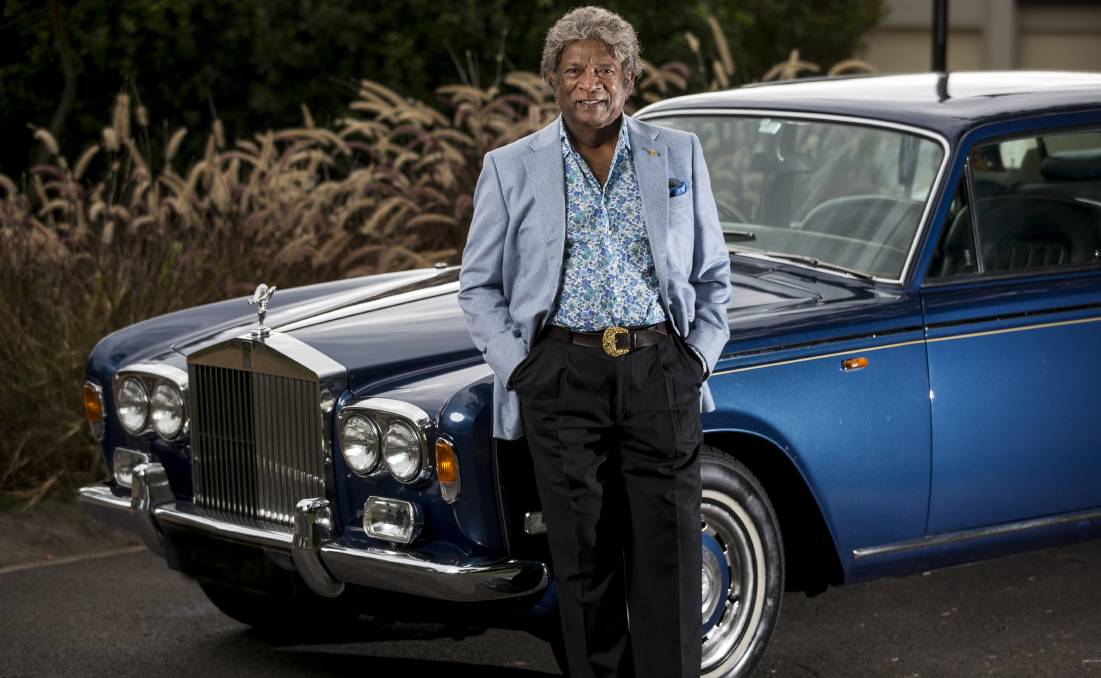 Which may be why, in June, he is set to auction "almost all" of his gold records - about 50 - for Variety, the Children's Charity Club, where he is a prestigious ambassador.

He also hints that he is negotiating to perform some big finale concerts in the neighbourhood, and set to record some big hits along the lines of the epic poem Desiderata he famously set to music.

Legacy building, I think. "I'm going to start all over again with a piece of music that talks about the joy of life," he says. "I'm 86 and I don't have spring in my step anymore - it's autumn and it will soon be winter."