A little while ago, author Jack Heath was watching his six-year-old son Red do a jigsaw puzzle while simultaneously eating some corn chips.

"I watched him sort of pick up a puzzle piece and absentmindedly put it in his mouth, and then chew it for a weirdly long time," says Heath. "I thought, oh god, what sort of absent-minded person would do that, and then I went, yeah, me, I would do that.

"Kids can sometimes be a little clone of you and that's not always a flattering reflection. You look at your kids and you see things about yourself that you don't necessarily admire kind of reflected back."

Now take this innocent moment and plant it firmly in the middle of a book about a cannibal, set in a house full of psychopaths running a torture website on the dark web and you have Heath's latest book Hideout.

Timothy Blake is back, the likeable hero who also happens to be a cannibal, caught up in a gruesome game in this house of horrors, and one of the other housemates may or may not be his son from a long forgotten sperm donation.

"Blake is kind of being forced to confront his own flaws from the outside for the first time," Heath says.

"And whether it's his son or not, he's still kind of thinking about himself in a different way. That's an insight that I wouldn't have had if I hadn't had the kids to inform the books."

It only seems like yesterday that Heath himself was a child. He published his first book at 19, he's written about 30 now, including three books for adults in this Blake series, starting with Hangman in 2017, followed by Hunter in 2019.

He's 34 now, he and his wife Venetia have two children, Red, six, and Ash, one. He writes mainly in the back shed during the day, at night he's telling the kids stories that perhaps aren't as dark, or listening to their stories which he loves. 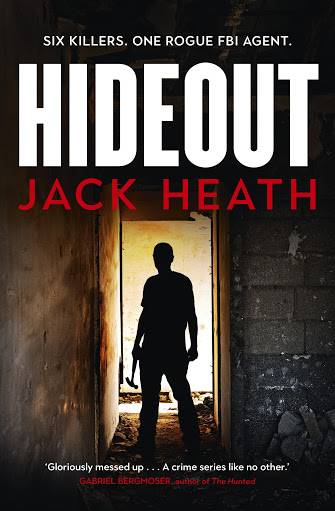 "People always just forget how sort of weird and dark the mind of a kid can be," he says. "Once we become adults, we sort of transition into thinking of children as innocents, who must not be corrupted by society, as opposed to thinking of them as monsters who need to be civilized. Probably both are true."

Given the story line at their core, he's still a little surprised the books have been so well received. Hangman was optioned by the producers of Homeland, Hollywood was keen to see where he could take the series, and now two books later, Heath himself is starting to believe he can write books for adults.

"Hangman was never supposed to have a sequel," he says. "It was something that sat in a drawer for a really long time, because no publisher wanted anything to do with it."

It took him about 10 years to get the manuscript to the point where he felt he could show it to a publisher.

"I just didn't believe I had the skill as a writer to pull it off. The fact that it got published at all was a miracle, let alone it being successful in so many different languages and everything like that, so now I'm kind of seeing how much further I can push this."

One thing he's done with Hideout is to set the story in this one location, a house in the middle of nowhere. Blake's intention was to start killing off the bad guys but someone is beating him to it. It's like a macabre game of Cluedo. Killed in the kitchen by a cannibal.

"I've always enjoyed those Agatha Christie-like closed room mysteries," he says. "I wanted to explore that with this one."

He remembers attending a writers' festival in rural Tasmania last year where all the authors were put up in this one house in the middle of nowhere. "Tara Moss was there, Angela Savage, Shamini Flint, Meg Kenneally, L.J.M. Owen ... we did this panel called Murder She Wrote. I do remember thinking if tomorrow morning one of us turns up dead then no one will figure out who did it, we all plan murders for a living."

He says he doesn't have any trouble switching between writing for children and for adults.

"It's funny how the two genres or categories have more in common than anyone would like to admit," he says. A young Jack Heath in 2010 with his book Hit List. Picture: Marina Neil

"Whether you're writing for kids or adults, you still want to, particularly with adult thrillers, you want a fast pace, you want lots of suspense, lots of surprises and you want sort of rich sensations in the scenes and stuff.

"Ultimately, it just comes down to when I'm writing for kids, I know that there are sort of landmines that I don't want to step on, because they will anger parents or teachers or whatever. Whereas when in writing for adults, I take great delight in deliberately stamping on all those landmines just to see how the readers will react."

One thing Heath has missed in a COVID-restricted 2020 is running workshops with school children. He's a popular guest at schools and libraries, his books are incredibly popular and critically well received as well. But the visits were starting to worry him.

"One of the things I would do is give the kids a writing prompt and get them to write a story and then read it out loud. It's only been relatively recently that there have been students, and we're talking primary school aged kids, who start saying 'I just can't think of anything'.

"Maybe it's just because I'm getting a bit older and have some gray hairs and maybe I'm not connecting with the audience in the same way.

"These schools where the kids just can't think of anything, where they can't access their own imaginations, they tend not to have particularly well-stocked libraries, or not many library staff, there's often no teacher librarians.

"And it's not like these are under-resourced public schools, some are fancy private schools that can afford to fly an author in to talk to them, they have sporting fields, an iPad for every student. It's not that I think the kids are stupid, it's not like they're sitting around doing nothing instead of reading.

"They're doing other amazing things like protesting climate change, and they're making their own dance videos, or whatever and that's fine.

"But I do think one of the wonderful things about reading a book is that because the book is not a movie, only half the work is done for you. It tells you what's happening, but it's your job to picture it. It's a workout for your imagination.

"So if nothing else, at least I can pass that on to my kids. I can read to them every day and encourage them to read themselves in the hope that they will have the imagination someday to solve the world's problems."

This story Dark story full of imagination first appeared on The Canberra Times.