It's a wet, cold, miserable winter's day in Newcastle, but Craig Johnston is taking it all in stride. He's got a smile and joke and a hustle in his step, even though he's only recently recovered from major cancer surgery on his face.

He knows I'm here to talk about his sister Faye, but he's keen to chat because he knows it's for a good cause - raising awareness about acquired brain injury, and in particular, Headstart, the organisation that has helped his family deal with Faye's injury for more than 30 years.

Johnston's appreciation for Headstart Acquired Brain Injury Services, and in particular Sue McHattie, executive director of the organisation, resulted in him giving his time to appear in Headstart's new television advertisement campaign and social media campaign, which were launched last week.

The package includes a six-minute video where Craig and his mum Dorothy go into detail about Faye and her injury, its affect on their lives, and their appreciation for Headstart.

In the video he says of Headstart, they are "wonderful people that fully understand the pressure, the hurt, the pain, and love that you'll need to get through".

Johnston, arguably one of the greatest football players produced in the Hunter region, played in 271 games and scored 40 goals for Liverpool FC in England.

He first played for Middlesborough as a 17-year-old, and finished his career at Liverpool at age 27, in part due to coping with Faye's brain injury.

While Johnston has been a supporter of many good causes, often as a guest speaker at charity fund-raising events, he doesn't talk about Faye very often.

"A lot of this gets emotional," he says. "I don't like talking about it in public."

A lot of this gets emotional. I don't like talking about it in public.

Craig Johnston talking about his sister Faye, who has an acquired brain injury

Johnston's autobiography, Walk Alone, The Craig Johnston Story, written with Newcastle journalist Neil Jameson and released in 1989, shortly after the end of Johnston's playing career, offers a vivid account of the moment in 1986 when Craig learned of Faye's near-fatal injury and how he responded to the crisis.

With a plaster cast on my toe I checked myself out of hospital so I could join the lads for the not-to-be-missed LFC fancy dress Christmas Eve party, I was at home climbing into my Dame Edna Everage costume when the phone rang.

The extended pips suggested it was a call from Australia. Mum's voice came on the line. In her deliberate, unflappable way she said: 'Craig, it's Faye. She's had an accident. They don't think she'll live . . .''An accident? What sort of accident?' I said, panicking. 'Mum, where is she?' A couple of weeks earlier we'd received a letter from my sister Faye. She was in Morocco with her two-year-old daughter and was on her way to England to visit us before returning to Australia. What a brother does: Craig Johnston with his sister Faye after her tragic brain injury.

I couldn't believe what Mum was telling me, Faye had been taking a shower when the flame on the gas hot water system had blown out. Overcome by fumes she had collapsed and crashed her head as she fell. She had stayed on the shower floor inhaling the deadly fumes for possibly as long as an hour before anyone found her.

Johnston responded immediately, chartering a flight to France where a Lear jet with medical staff that he had chartered was waiting for him on the tarmac at Le Bourget airport on the outskirts of Paris and flew directly to Tangier, where they located Faye at a hospice.

Again, from his book:

The scene that greeted us was like something out of the movie Midnight Express. We found Faye on the second floor of an antiquated building, lying comatose on a bed in a crowded ward. Her eyelids were blistered, her face was puffed up and discoloured red and yellow. Tubes ran from her nose and mouth. Her body had already begun to waste.

With Craig comforting Faye's two-year-old daughter Jamillah, taking her to the ground-floor chapel to pray, the medical team worked for an hour to stabilise Faye for the flight direct to London.

Difficult times: Craig Johnston with his sister Faye after she suffered a brain injury.

The Johnstons' parents, Dorothy and Colin, arrived in London four days later while Faye was still in a coma. Craig, with the cooperation of the Liverpool club, kept Faye's story private, and he continued to play football while commuting between the hospital and the football pitch.

Eventually, Faye was brought back to Lake Macquarie by the family. She regained consciousness and mobility. She has lived at the Fig Tree Point aged care facility in Toronto, on the shores of Lake Macquarie, for the last seven years.

"We purposely kept it out of the public eye," Johnston says. "It's family business. We've hoped for years it would be a happy story. But she's still in the same state. On purpose, we've kept that to ourselves."

As sad as the story is, Johnston can find the bright side.

"Faye has her moments," he says. "Whenever she hears Cat Stevens she comes alive. You can talk in front of her, she will be silent for hours. But when something relevant to the family comes up, she smiles and giggles."

Craig Johnston retired from football at Liverpool FC at age 27, in part due to his sister's condition. "I walked away from the game due to Faye's accident," he says. "Seeing Faye in hospital really slapped me around."

Siblings almost always have a unique dynamic. While Charmaine was the oldest member of the Johnston clan, Faye and Craig were closer in age and attitude.

"Faye was a mini me," Johnston says. "We were similar in our exuberance and cheekiness. Exuberant cheeky monkeys. But Faye landed in trouble more than me. That's why people loved her. Everyone from Speers Point Primary and Booragul High has a Faye Johnston story. I've often been referred to as Faye Johnston's brother."

Upon the return home, Jamillah was raised by Dorothy Johnston (Faye's husband, Kevin, had died while doing relief work in Pakistan at age 21). Jamillah has a husband and two children and lives at Ulladulla on the NSW South Coast. 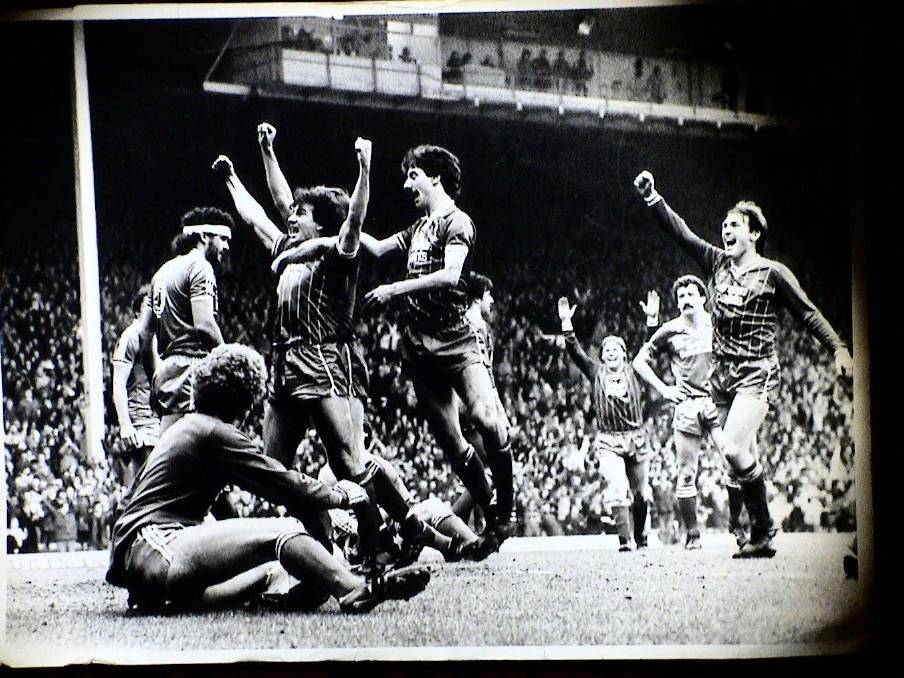 At the height of his game: Craig Johnston celebrates scoring a goal for Liverpool against Bright & Hove Albion in 1983 in an FA Cup quarterfinal match.

Dorothy Johnston gave up a career in education to care for Faye after the accident.

"Mum's the hero here, still is to this day," Johnston says.

In this reflective conversation, Johnston describes the roots of his family.

"I got a lot characteristics from mum and dad. You are a product of your parents," he says. "They were Newcastle folk. That working class background gives you the stability you need to take on hard tasks, impossible tasks. And if you fail, at least you did your best. And at least you tried - you did your best."

Faye and Craig's interwined story was full of decisions - some hard, some easy.

Of the dramatic rescue of Faye from Tangier, Johnston says, "That's actual instinct. It had to be done. Mum and Dad couldn't do it. There's hard decisions, and easy decisions. Faye's was easy. Walking away from football at 27, that was a hard decision.

"Getting her [Faye] help was easy. What Mum does every day - that's incredibly hard. She's the hero every day.

The Hillsborough disaster occurred on April 15, 1989, during an FA Cup semifinal football match between Liverpool FC and Nottingham Forest at Hillsborough Stadium in Sheffield. Over 90 people died and more than 700 were injured in a crowd crush, and most of them were Liverpool fans.

Johnston, who was back in Australia at the time, raised funds in Australia for the victims and returned to England to assist victims.

"The injuries in that tragedy were caused by lack of oxygen to the brain," Johnston says. "All the recovery stuff was the same - brain injury due to asphyxiation. We did a lot of similar things to Faye."

As part of Faye's recovery, they played her favourite music (Cat Stevens) and recordings of her daughter Jamillah's voice and sounds (they pinched her to make her cry for a recording). For Hillsborough victims, they recorded voices of Liverpool stars like Kenny Dalglish saying phrases like, "Get out of bed, son".

As much as the Johnstons have contributed of their lives to assist Faye, Headstart has held a significant role. Besides understanding the trauma of the injury, Johnston credits them with much practical assistance, like sourcing a wheelchair, and adjustable bed and subsidised carer.

"Headstart understands brain injury, and the effect on the family," Johnston says in the promotional video. "That was our only saviour and still is to this day."