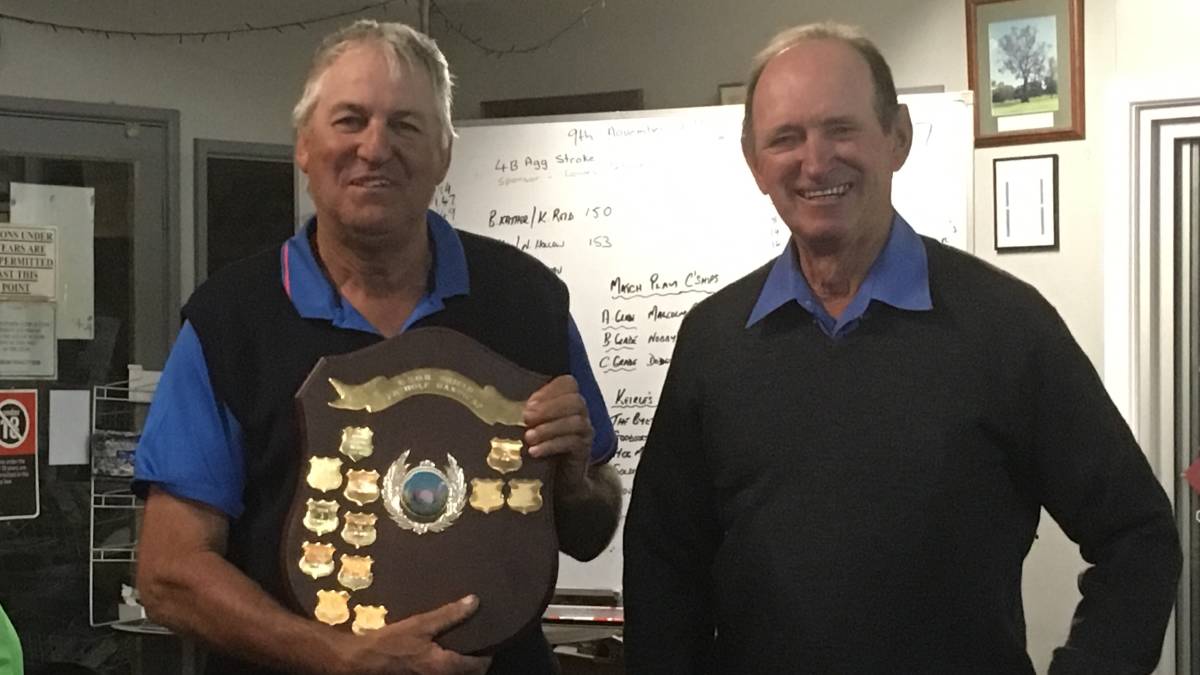 Winners on the day taking home some very lovely "cooler bags" donated by Lowes Petroleum BP were: Luke Taberner and David Thompson with 141. Ron Cowan and Rod Pedron runners-up with 143.

Remember all Competition Team entry fee must be paid by next week's round.

LADIES: Wednesday saw Kathy Martin take out the day's event which was very kindly catered for by Quota Ladies. Today see's a Canadian Foursomes Event with next week being the 2019 Presentation/Christmas Party

GSOH Night: Saturday saw a small but very enthusiastic crowd of players and friends turn up for a BBQ, Putting and Farewell to John Gersbach. Some nice words were spoken about John and then he presented the 2019 Travellers Mug to David East and the 72 Hole Championship Trophy to David Naveau. All the very best to John and Deb on their new adventure wherever it may take them.

The same format will apply as in previous years with events for Juniors over 25 and 50 Metres with Seniors 30 and 50 metre as well as the Brace Relay draw for partners. All events will be closes to time.

The after swim BBQ will continue with some changes to the cost.

New Members are welcome with the condition that you must be a member of the Wellington Soldiers Memorial Club. Membership remains at $2.

The Wellington Rebel Darters were back on the boards the previous Monday night at the Wellington Soldiers Memorial Club with only a couple of rounds left to play in the point score.

David Wilson still leads and is sitting pretty at the moment with 91 points. Jason Cornish is his nearest challenger on 87 points, Allan Brown has 71 points, Richard Kent has 68 points.

Ladies highest peg went to Hayley Watts with a 55 and the Men's went to Richard Kent with 90. Mudgee darts are on this Saturday, November 16 for all those interested in playing.

This Saturday sees plenty of action at the Wellington Bowling Club with the Club Championship being played and the Final in the Pairs as well.

The Club Championship match sees Scott Reid who has hit form going into the Final and he takes on David Wilson who may have played his final in the semi.

The Pairs Final sees Carolyn Stace and Paul Manning who have combined brilliantly and will be quietly confident and the take on Colleen Forby and Ian Humphries who put the cleaners through Robyn Hynton and Garth Watts winning by 22 to 17.

Presentation day has been set down for the 30th of November with bowls in the morning from 10am followed by a luncheon, please place you name on the notice board, this is for catering purposes.

Men's Bowls AGM will be held on December 4 from 5pm, come along and have your say how things can be run.

Wellington's Wednesday Men's Bowls are on again this afternoon with all names to be in by 1pm for a 1.30 start, so come along and have a great afternoon out at the Bowlo.

SENIORS: Peckers versus Cowboys in Dubbo. No result to hand. Westside versus Muckarounders, Muckarounders batting first were six for 156 (Sam McGregor 42, Mitchell Pres)ton 44no.

Westside seven for 121 S Hangman 60no and M Silk 31. Redferns versus Geurie, Redferns won five for 163 but no further details.

Representative: Wellington play Dubbo in the Western Zone Plate KO. All the best to the guys this week.

JUNIORS: All three teams are gaining more players each week, well done to the Coaches- Joe Mason, Rob Dimmick and Ryan Angell and their assistants.

12B Green lost to Cyms White - Wellington 83 to Cyms 202 with Gain and W Duetscher nine runs each.

One wicket each was taken by Mitchell Hughes, Pat Angell and Hugh Gain.

Representative Cricket: A 12 years team has been entered in the Lachlan Council Competition.

Sunday they played Parkes at Parkes with a very young team. Parkes six for 202 winning to Wellington's 9 for 157, great effort first up

This Sunday they play Dubbo Blue at either Rygate or Pioneer 2 with Rob Dimmick speaking with parents and players at today's training before finalising team.

Other players playing for Dubbo are: Rupert and Archie Mason in Dubbo White 12s who defeated the Blues. With Rupert two for 21 from four overs and Archer zero for ten from his four overs opening the bowling with Deacon George in the Blue team batting number three returning home without any runs.

WELLINGTON PUBLIC GIRLS: Congratulations on their win over South Wagga PS last week and now play Illaroo PS (Nowra) here in Wellington, to be played very soon, as State Semi-finals and finals are scheduled for November 26.